Valentine's Day without my fuzzy sweetheart

Roses are red, but I'm still terribly blue about losing my dear Fox. Which means I have a few more cat stories about Fox. And Spike, who died in 2014.

I adopted Fox in 2004 because my cat Vincent had died a few months before, and Spike, who was six years old at the time, was obviously lonely. A guy named Steve had been feeding stray cats in the West Adams neighborhood of Los Angeles, and one day, a half-grown kitten wandered in and joined the group. Since the little guy was only five or six months old and possibly adoptable, Steve decided to try to find a home for him. He posted a note and a photo (below) at my place of work, and as soon as I saw that face in the woodpile, I knew he was going to be my cat. Instant connection. So I brought him home and named him Fox. (After Fox Mulder, and Matthew Fox on Lost.) 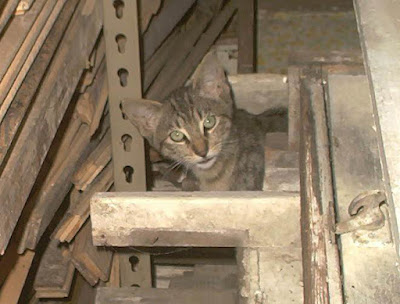 Spike was thrilled to have another cat in the house and tried to make friends immediately. (I was lucky, because sometimes cohabiting cats despise each other forever.) Fox, who I assume had never lived in a human home, ran under my dresser and refused to come out. I left food and water by the dresser, put a litter box close by, and left him alone to acclimate. Spike obligingly demonstrated the use of the litter box in front of Fox, and Fox began coming out to use it. Eventually, Fox started exploring the world beyond the dresser, and eventually came close enough for me to touch. After a couple of weeks, he was in my lap. A lot. 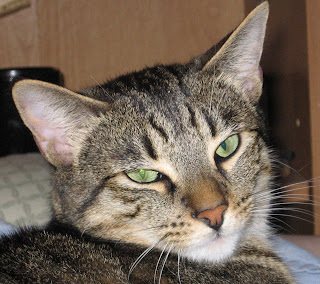 Sometimes I think about how miserable Fox would have been if he'd stayed on the streets. After his frightened and feral start, it turned out that Fox loved petting more than anything. He'd actually postpone eating for chance at some petting. He would curl up in my lap around my arm, positioning himself for maximum belly rubs.

Fox and Spike were so different. They had personalities that seemed diametrically opposed to their adoption circumstances.  Spike, adopted as a tiny five-week-old kitten, had spent virtually his entire life with us but was an utter misbehaving brat, while Fox spent his first months on the street but was incredibly sweet and well-behaved. It was always obvious that Fox loved being a house cat. He never tried to leave the apartment, never once ran for the door when it was open. He appreciated the food and shelter and love like no cat I've ever known. It was like he never forgot starving on the streets and living behind a woodpile, like his early deprivation was hard wired into his memory.

As I mentioned, Spike loved having a buddy again and despite their radically different personalities, the two of them were best friends. They chased each other around and wrestled, and often washed each other. One thing I love about cats who are best friends is the way they mimic each other's positions, sitting and sleeping. 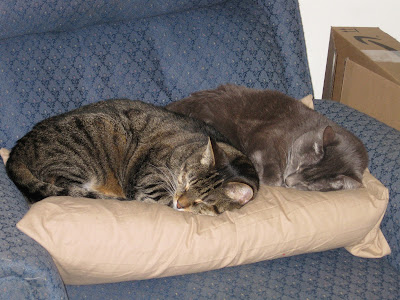 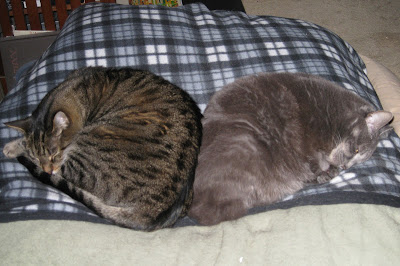 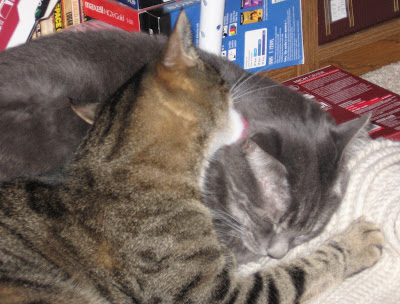 Cats and dogs understand some English words. Some cats understand more than others. Spike knew his name, "din dins," and "bad boy," and that was pretty much it. Fox understood much more. Sometimes, when he was going through his many illnesses, vet visits and medication, I would sit down with Fox and try to explain to him what was happening. Fox often seemed to understand – not the actual words, of course, but the gist of what I was trying to convey. This past year, when I had to give him insulin shots twice a day, he at first avoided them, which was totally understandable. So I kept telling him that these shots were keeping him alive and feeling well so that he could stay home with me, and I swear, he understood. After meals, when it was time for his shot, he would come sit next to me and let me inject him in the scruff of his neck. I've never had a cat do something like that.

Even though Fox loved my son Daniel and even though Daniel always took very good care of the cats when I was gone, Fox's primary connection was with me and he would get extremely upset when I went away on a trip. Last September (2017), I went on a four day trip down the east coast and back through the mountains of Virginia. Daniel gave Fox his insulin and plenty of attention, but Fox spent the entire four days curled up in my favorite chair, depressed and withdrawn. It took a couple of days for him to forgive me. It was always that way. I recently found a paragraph I wrote when I returned from my trip to Seoul back in 2006, when Fox was only two years old:

Daniel told me that the quiet, perfect Fox was a total brat while I was gone. He was probably spurred to action because Daniel isn't quite as Johnny on the spot with the service as I am. Daniel said Fox complained constantly to him that there were no crunchies, that the box wasn't clean, that dinner wasn't on time. Saturday morning [the day after I returned], as I was lying limply in my easy chair with my coffee, Fox sat down in front of me and gave me this look of utter reproach. I've never seen an expression like that on a cat's face before.

This was such a heartful post, Billie. I loved it. I was impressed at this:

I would sit down with Fox and try to explain to him what was happening. Fox often seemed to understand

I'm pretty sure that if I ever need and try to give insulin shots to my youngest cat, he will assassinate me.

I laughed out loud a couple of times too. This bit was my favorite:

Fox sat down in front of me and gave me this look of utter reproach.

Like your Fox and Spike, one of my cats is from the streets but he is so calm and sweet, while the other one is with me since he was six weeks old but he is impossible.

Anyway, it's always great to read your cat stories, Billie. And I hope you get better.

Thanks so much, Lamounier. That thing about the parallel in cat personalities is really interesting. Maybe a cat who has never known deprivation simply isn't afraid of losing their home, but a cat who feels that they've lucked into something wonderful is always afraid.

I'm doing a bit better. I still miss him so much, though.