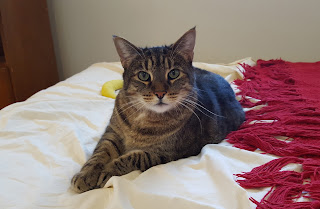 I had to say goodbye to my dear kitty Fox yesterday. He would have been 14 in May. As I guess is par for the course after a lifetime of one serious disease after another, he had a strange and confusing final illness. And as is par for the course for me, I've been second guessing my decision to let him go, even though I know deep down it was the right one.

This is a tough time, I won't lie. I'm glad Fox isn't in pain any more, but there is a gaping hole in my life right now. Fox was such a sweet, smart cat, such good company, even with his many illnesses.

But what's hardest is, this is the first time I've come home from saying goodbye to a beloved feline friend, and there was no other cat waiting at home to make the loss a bit easier to bear. I've had two cats at the same time for most of my adult life, but I decided back when Spike died that I wouldn't adopt another cat to fill the "vacancy." And now that Fox is gone, there are no cats at home any more. There are still many reminders to be cleaned up and thrown away: his food dishes, his battered toys, his favorite blanket on his favorite chair, way too much medication. Trying to sleep without him last night was brutal.


The unanswered question now is, can I live without cats? Honestly, I have no idea. I would still really like to do some extended traveling and obviously, it's a lot easier to do that alone. I'm also feeling right at this moment that I simply cannot bear to lose another beloved feline companion, which means never adopting again. I'll just have to wait and see.

I am so sorry for you.

I'm so sorry for your loss, Billie.

Oh my god, Billie, I'm so sorry for your loss.

I believe your post proves you were the type of owner any cat would be proud to have in a world that's not easy for cats or humans. There's nothing that can really ease a loss like this, but I believe in what Diane Duane wrote: What's loved, lives. Big hugs.