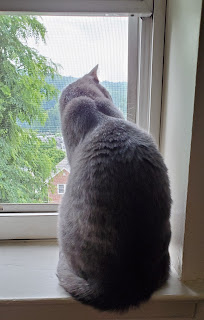 Dax and Kara, who just turned two years old, are indoor cats, and like pretty much all indoor cats, window sills are their favorite place. While my apartment is mildly shabby, the view makes up for it.

Daniel recently took a lot of gorgeous photos of our window twins. With the state of the world in general and the U.S. in particular as it is right now, I thought maybe cute photos would be in order.

The two of them "twin" a lot – see below. (Click on the photo to see the larger version.) My unrelated cat duos did that too, but they didn't look alike. Kara and Dax do still look a lot alike, except Kara (left) is visibly pudgier these days. 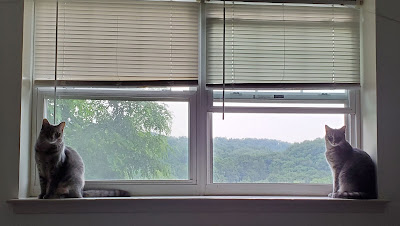 They also tend to choose the same side. Kara is usually on the left, and Dax the right. I wonder why?

This is a particularly nice little shot (below) where their whiskers seem to glow because of the backlighting. (Click on the photo to enlarge it.)

Here are the two of them jammed into the dining room window, a single instead of a double. 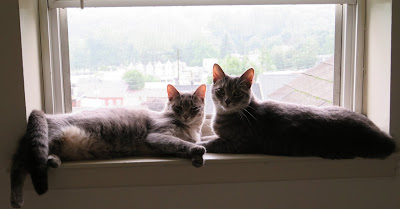 We don't get a lot of traffic on the street below, but it can get extremely noisy at times. A certain family across the street has screaming arguments and loud parties, occasionally at the same time. Kids play in the yards, and birds visit the tree you can see behind Kara. Santa Claus goes by in a fire truck every December. (I'm not kidding.) We also get fireworks over this mountain on New Year's as well as the Fourth of July. Kara and Dax have asked me to mention that they disapprove strongly of the fireworks. 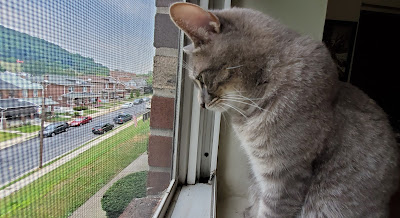 And there's the Pagoda, an odd landmark that's visible from my windows. Probably an odd thing for a Pennsylvania city to have, but there you are. It's neon red at night, and there are occasionally police cars with flashing blue lights (I hear that there is occasional drug traffic up there). Twice a year, the cats are disturbed by the "hillclimb," a strange local event where roaring sports cars race up the twisting, winding road from the park up to the Pagoda. Yes, it's one at a time. They're not completely crazy. 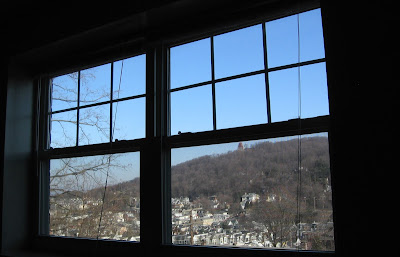 So maybe my new home isn't as interesting as Los Angeles. It is occasionally scenic and strange, and certainly a lot more affordable.
by Billie Doux