Yes, I love them now 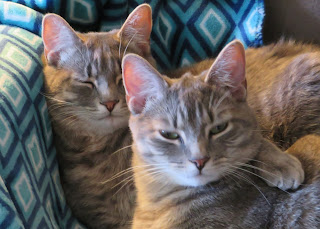 My kittens have become cats. They're one year old this week. It's way past time that I posted an update.

Kara and Dax are finally maturing, but as half-grown kittens, they were bordering on demonic. In fact, they were so mischievous and destructive that I briefly considered trying to find them another home. (I would never return animals to a shelter.) It did finally get better and yes, I love them now, very much.

(Yes, his name was Desmond but that has somehow become Dax, mostly because of his trilling vocalizations.)

Why did it get so bad? Because I was sick for four months? Bad timing, that. Because there are two of them, making for double the mischief? Spike was a holy terror when he was a kitten, but there was only one Spike. On a single memorable afternoon, Dax and Kara broke my favorite lamp, chewed up and destroyed Daniel's earphones, crash-landed in their water bowl and got water everywhere, attempted to climb my dresser leaving long scratches in the wood, ran over my foot and tore a bloody hole in my toe, and in general behaved so badly that at one point, I put them in the cat carrier for an hour.


The water thing was the worst. I couldn't figure out why there was always water on the floor until I caught Kara nudging their water bowl across the room with her nose. Later, I caught Dax trying to dig under it. Completely flummoxed and pissed off, I tried everything: mugs, glasses, every shape and size bowl I had, even pots and pans, but they either splashed the water out or pushed over the container. We bought a water dispenser that holds an entire gallon, thinking it would be too heavy for them to move or knock over, and wrong. Picture me in the kitchen, frantically trying to mop up half a gallon of water before it seeped through the floor into the apartment below. (I succeeded, but only because of quick and judicious use of several rolls of paper towels.)

I consulted with friends and one of them gave me a solution (thank you, my friend Das): a stainless steel bowl in the bathtub. It's perfect. The twins love the bathtub. I think every cat loves the bathtub.


Kitten-proofing the apartment has been a constant challenge because Kara and Dax are obsessed with electrical cords. We can't even leave out something as simple as a cell phone charger. Practically every cord in the apartment now has a protective velcro wrapping to keep them from biting through it and killing themselves. We were using hard plastic covers over some of the cords until Kara decided to chew on one; she was crunching it like potato chips. I stopped her before she swallowed any of the plastic shards.

The twins carried out a two-pronged attack on the flat screen television in the living room – the front and sides but especially behind it, and stretching their paws to the top in an attempt to bring it down. Daniel organized and covered the wires and we have small empty boxes stuffed behind it now. I block off the front with a huge empty box every night so that they don't topple the TV while we sleep. Both counters in our kitchen are also blockaded with boxes, a constant inconvenience, but how can we let them prance around on the stove? For a long time, we were able to put things Not To Be Played With on top of my tall dresser, but then the two of them became obsessed with jumping up on top of it. Now they're on top of the dresser all the time. They're on it now, even as I'm typing this. 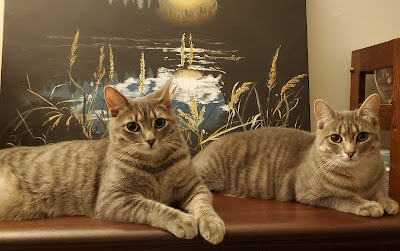 Dax and Kara move objects together. It's hilarious. They moved the bathroom scale across the bathroom floor. They try to move the small metal lock box where we keep things like birth certificates and passports so that they could get under an end table. They also share a mutual obsession with the litter box. When we first brought them home, they went in and out of the litter box repeatedly without using it, and waited in it to ambush each other. When one used the box, the other ran over to observe and monitor. This behavior has stopped now that they're older. But at one point, they realized that a big cardboard container of kitty litter was empty, and together they knocked it over and moved it across the floor. Operation Scoopaway. They also move objects during the night, like my bedroom slippers, and drag their dangly toys (we have many, many dangly toys) into the kitchen.


Although things have gotten better, there is no sleeping through the night. That's all Dax. He throws himself at Daniel's closed bedroom door repeatedly, usually at four in the morning, or makes loud attempts to open kitchen and bathroom cabinets. *bang* *bang* *bang* We have several cabinet and closet doors held closed with duct tape now. Or he'll jump on me while I'm sleeping and ask for petting and if I don't pet him, he bites me. Yes, he literally bites the hand that feeds him.

Honestly, I don't get it. We play with them and give them tons of attention, we have cat toys and treats all over the place, two semi-expensive cat trees (Dax started to eat the carpet off the cheap one so we had to get rid of it), perfect cat-friendly window sills with a view of the neighborhood, and it's not enough. 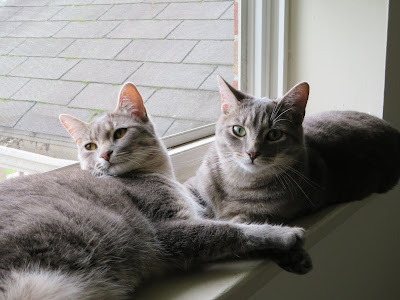 But it is getting better. The rampaging has gotten less rampage-y and they haven't knocked over the furniture in awhile. (Yes, they knocked over small pieces of furniture as they thundercatted through the apartment.) They leave coffee cups and tissue boxes alone, although a glass of water on an end table is still fair game.

After all this bitching, I should mention the good things. They're smart cats, and they can be very sweet. They're both talkers with the merls and the trills, and they always respond when we talk to them. They both sleep on their backs, which is just too cute for words. 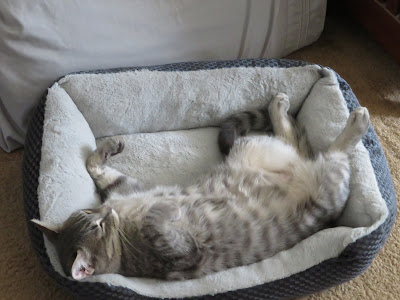 They wash each other, although they rarely sleep together. They're uninterested in human food, which is pleasant at meal times. Dax is already getting pudgy because he is obsessed with cat food; he pushes Kara away and takes hers, and she lets him. At least he doesn't try to nurse on my earlobe any more, because that was really uncomfortable.

They're nearly identical except for their eyes – his are green, hers are brown. They're a pleasure just to look at and to have around the house. And they do enjoy cuddling and petting, although it's the exception rather than the rule. Maybe someday it'll be the rule instead of the exception.

And maybe someday I'll re-read this piece and laugh because they're not little maniacs any more. Fingers crossed.
by Billie Doux

I love them!!! So glad the water bowl trick worked. It's clear to me that they're so mischievous because they have a safe home where they're not afraid to try new things since the big furless cats who feed them are so kind.

Or they're possessed, and that's cool too.

I love them. they are so sweet and pretty.

I do empathize with you as they go racing around.

Note to self: never get two kittens. Sorry they've been such a handful, Billie. Glad you love them now. I think every new pet owner experiences a moment or two of "I can't handle this maybe I should give them away" I know I did, with Beau and with Ava (my dogs). But chalk it up to temporary insanity because I don't know what I would do without Ava in my life and Beau made me so much a better person. Sorry you can't sleep through the night. I can't imagine what a year of that must feel like. Ava stopped waking me up within a few days of coming home. But I suppose I'll find out how much fun that experience is if/when I have kids. As for cords, Beau and Ava each had got one in their puppyhoods and then gave it up which I am so SO grateful for. Ava's quite the jumper/reacher, but is thankfully not a cat so there are places I can put things that are not to be chewed up.

We had one of our Birman kittens chew through the power cord on the Christmas lights, one loud bang, lights went out and Insi (Heathfields Inspiration) shot up in the air with all her fur on end. She wasn’t terribly bright, a dear friend always referred to her as the dumb blond of the cat world, but I think that was in her nature rather than as a result of the shock

Thanks so much, guys.

Das, I'm so grateful you came up with that water bowl in the tub thing because I was getting very, very tired of mopping up water on the floor. Thank you again.

Judy, they are indeed very pretty. They're lovely cats and they keep getting calmer. Maybe in another year...

sunbunny, the sleep thing is hardest on Daniel. Dax seems to want to wake him particularly and usually leaves me alone. Daniel actually gets up and gives them food and then crashes in the living room so that they'll let him go back to sleep.

Franni, laugh out loud, even though it's not all that funny -- poor kitty. That's exactly what I've been so afraid of happening. Knock wood.