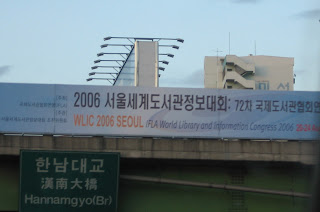 I love the Winter Olympics.

However, this is not a piece about the Winter Olympics. For years, I've intended to do a post or two about my trip to Seoul back in 2006. Now's the time.

The twelve-hour plane ride was grueling, but actually not as long as my trip to Oslo in 2005 that included a short layover in Paris. The Korean Air flight attendants, mostly young Korean women, kept bringing us water and juice during the flight, so even though we couldn't bring water on board, I didn't get dehydrated. The food was pretty good as airline food goes. So was the in flight entertainment. I saw a lot of forgettable movies, including Failure to Launch, Mission Impossible 3 and Firewall, and did a lot of reading.

The airport is at Incheon, which is an island, and there is an expressway to Seoul. Our driver, whose English was limited but certainly better than my completely nonexistent Korean, said "Hello" when he wanted to point something out. It was a lovely day, blue sky, gorgeous bridges, rocky brown mountains in the distance, although the Seoul area seemed very green to me.

On the highway parallel to the river, I saw hundreds of skinny apartment buildings, twenty stories or more, either white or light in color, with big picture windows facing the river and the mountains. During the drive, I noticed that the cars looked very familiar but had model names I'd never heard of before: Carniva Park; Arante XD; Starex; Dynasty; Carens; Verna. Many of the signs have English under the Korean. 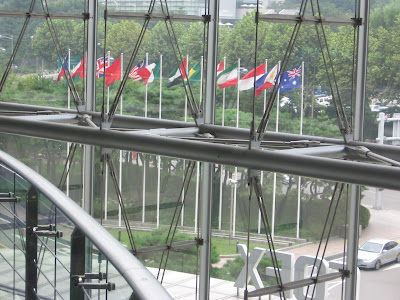 I stayed at the convention center's hotel, the Coex in Seoul, in a room on the 22nd floor that had a view of the Han River. It was quite possibly the nicest hotel room I've ever stayed in. The bathroom in particular was wonderful – especially the stall shower. I wanted to take that room home with me to Los Angeles. I'm such an international travel neophyte that I particularly loved the line of electrical outlets intended to accommodate people from all over the world. It's just not something I was accustomed to seeing in hotel rooms.

On Friday, I woke up at 4:30 a.m. and couldn't get back to sleep. Not surprising, under the circumstances. After an outstanding buffet breakfast downstairs in the hotel, I went exploring. The convention registration desk was not yet open, so I went for a walk. It was already hot (it was August), and the breeze was very strong. Eventually, I wanted air conditioning so I went down to the mall, which is partially underground and attached to the convention center. (I loved that mall. More about it in my second Seoul post.)


On Saturday, I woke up at 4:00 am again and couldn't get to sleep. At 5:45, I gave up, got up, made coffee, and sat at my little table at the window and watched the sun come up behind the mountains and the Han River. I hadn't used a French press before, but got it after a couple of tries. I had difficulty figuring out how to work my strange alarm clock, but it did go off. It played "Fur Elise."

There were committee meetings and other sessions on Saturday, including the opening ceremonies with the first lady of the ROK, Kwon Yang-sook. She was wearing a gorgeous traditional costume and I stood up to take a photo of her, and someone made me sit down. Apparently, photos are okay, but standing up in her presence was not. Perhaps I was unintentionally disrespectful. I apologize, Madame First Lady.

My Seoul trip lasted eight days and mostly consisted of work, but I had signed up for two half-day tours. The first tour was on Tuesday afternoon, and it was a total bust. It was hot and boring, if you can believe it.

We went to Jogyesa Temple in downtown Seoul, the headquarters of Korean Buddhism, and that was interesting. Note the backward swastika on the roof, which is a Buddhist symbol of the eternal wheel, not a salute to the Third Reich. 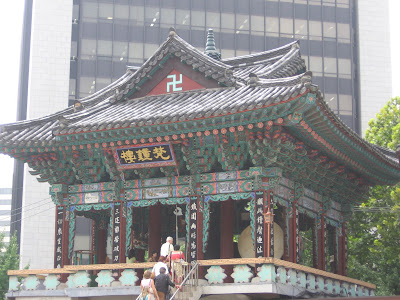 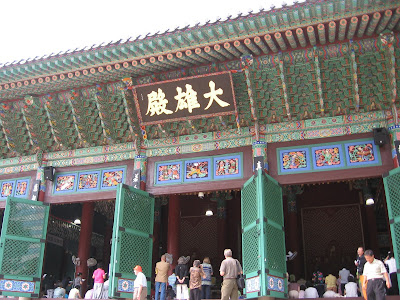 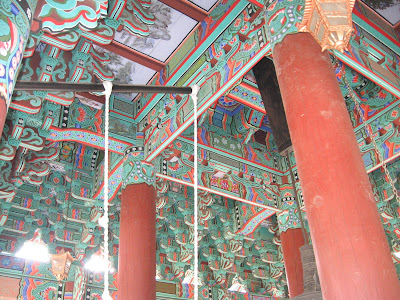 Then we went to Changdeokgung Palace, where the royal family used to live during the Joseon Dynasty (14th-19th centuries). It was over an hour of walking around the immense palace grounds, nearly all of which was dirt. It was afternoon, way too hot and extremely humid. At one point, I'd had enough and went back to the (hot) bus, joining several other conference goers, disappointed and drenched with sweat, already there. 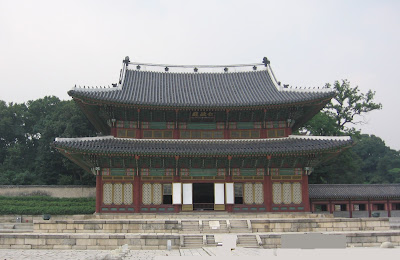 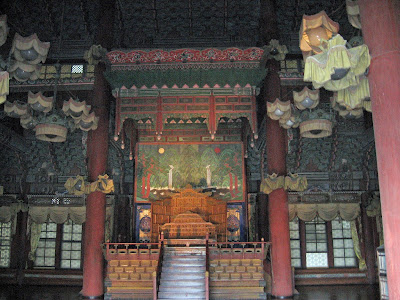 (Actually, I loved the bus. We don't get buses decorated like this in the United States.) 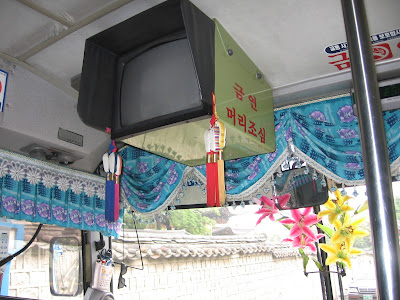 To top it off, the rush hour traffic as we returned to the hotel was so bad that we had no time to clean up before the "cultural evening," and I decided that I needed a shower and dinner more than culture. I later heard that the cultural evening was really wonderful. I should have done that instead of the tour.

On Thursday, I went on a tour of Seoul Tower. We had to hike uphill in the heat, and wait around for over half an hour before taking the elevator to the top. And of course, it was seriously overcast and we couldn't see much. Followed by a long walk downhill again. Another tourist opportunity that turned out to be all about sweat. 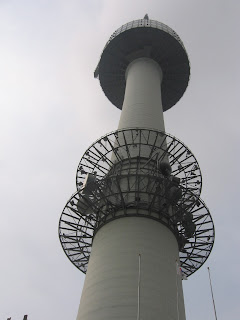 Probably the best tour experience I had was right after Seoul Tower at Namsan Hanok Village, a village of old, traditional houses with furnishings from Joseon Dynasty period. There was an exhibition of traditional clothing, as well. It was fun to see Seoul Tower in the distance after just being there. 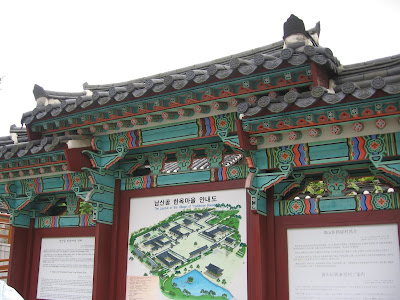 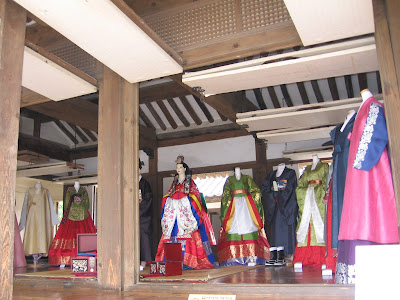 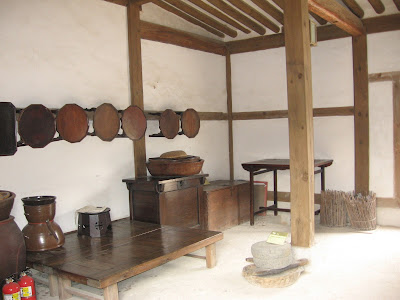 Although it was nice to see some traditional tourist spots, it was just too hot for sightseeing. I wish I'd known how hot Seoul could be in August. If I had, I would have chosen indoor activities.

Where I ended up connecting with Seoul was not with tourism, but with everyday life. Which I will discuss in part two.

Some asshole spammer keeps hitting this post, so I'm going to have to close the comments. Sorry about that.