The Eiffel Tower, of course 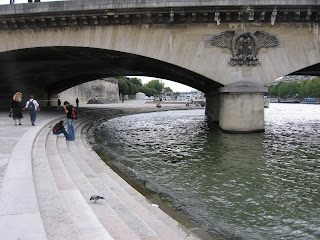 At Notre Dame, I took the steps down to the Seine and got on the Batobus. It was crowded and there was one particularly annoying crying toddler, but it was still a memorable experience. It went very slowly, stopping in several places, going under bridges. Its final stop in the west was the Eiffel Tower, where I got off.

I was very hungry and the first thing I did was buy a hot dog. A hot dog in France is a foot long, on a crusty baguette, and covered with melted cheese. I fed a lot of the bread to the extremely friendly pigeons and sparrows. 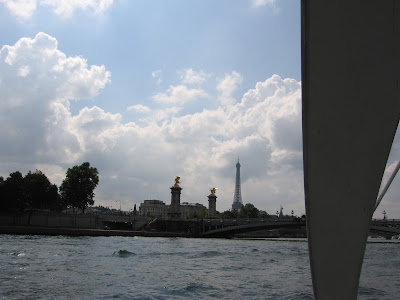 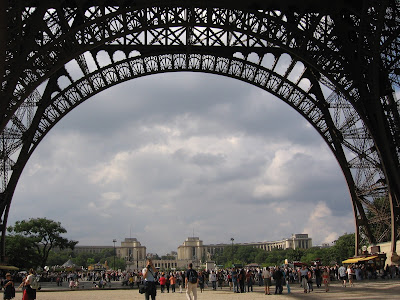 The Eiffel Tower is absolutely huge -- much bigger than I expected, somehow. It didn't move me like Notre Dame, but it was very impressive. There were (I might be exaggerating) thousands of people, armed French soldiers, and extremely long lines for the elevators. I remembered my fear of heights and decided not to go up. Plus by this point, my exhaustion was extreme and I was actually shaky on my feet. Although I did manage to do the obligatory shot from directly underneath. 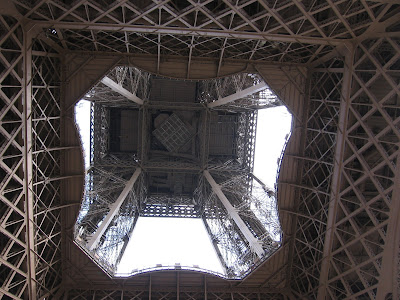 Back on the Batobus for the return trip. Unbelievably, the same family and same crying baby got on, too. At Notre Dame, I got off and walked to my hotel.


My hotel is a building like many in Paris. It is old and six stories tall, and there are six minuscule rooms on each floor, and a very tiny elevator. The woman at the front desk (possibly the owner?) actually asked me how often I planned to shower. Was that just a question for Americans? Do American tourists take a lot of showers? Turned out that even moving around in that shower to wash was difficult because it was so small. Quite a contrast to that huge bathtub at the Radisson in Oslo. Every time I see a large house or apartment or hotel room in Paris in a movie or television show now, I think of how expensive it must be.

My room was, as I said, very small, but it had French windows :) opening out to the street so it wasn't claustrophobic -- although it did feel like I was sleeping on a balcony. Oddly, I was okay with that. Just lying on the bed and looking at the buildings across the street was enjoyable, because it was Paris. I saw a couple of young people who looked like students on the balcony across the street taking photos of each other.

Both nights I was in Paris, I had dinner in a small restaurant three doors down from the hotel. It had only eight tables and one waiter, whom I later realized was also the owner and probably the chef. There was a large menu, but when I asked for one thing, he guided me to something else – beef steak, green salad and French fries – and again, I later realized that he probably only had a limited menu, which made sense.

I have some French but I realized the moment I arrived in France that it was inadequate for long conversations. (At least I could read street signs and menus.) But interestingly, after his other customers left, the waiter/owner and I were alone for awhile and we did get into a long conversation. He spoke mostly French and I spoke mostly English and we both had enough of the other language to make ourselves understood. I told him about my son and about life in Los Angeles. He told me about his father who had fought in World War II, and that August in Paris is quiet, full of students, and usually quite hot. I hadn't realized how lucky I was that the weather was so perfect – comfortable and sunny, with clouds like balls of cotton. He also told me in detail that two days in Paris were not enough. Duh.

What a wonderful post! I could imagine your room and I could smell that dinner. My favorite part of travel is talking to the people I meet. Everyone has a story!

Thanks, Chris! I knew I wasn't going to get to an expensive French restaurant during such a short trip, but I really enjoyed that little place and talking with the owner.