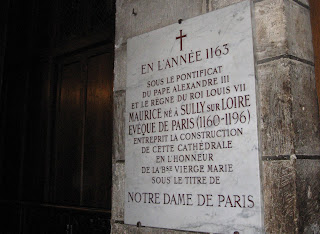 (I'm reposting this 2015 piece I wrote about my visit to Notre Dame de Paris, for obvious reasons.)

The recent terrorist attacks in Paris have finally pushed me into posting about my Paris trip in August, 2005. (I can't believe it was ten years ago!) I had managed to wangle two days in Paris at the end of my eight days in Oslo. Obviously, two days is not enough. Honestly, a full year in Paris is not enough. But two days were all I could afford at the time, and I was determined to make the most of it.

Where to go, what to see? Before the actual trip, I thought a lot about what I absolutely had to see, since there were no guarantees that I would ever get to Paris again. I bought a couple of guidebooks and spent a lot of time reading and making prioritized lists. There were five things at the top of that list, and they were all so very trite and predictable and what everybody does, but that's what I ended up doing. Maybe I should have come up with more exciting and unusual stuff to see. Sorry about that.

The one major thing I hadn't taken into account was how exhausted I would be. My trip to Oslo was an eight day work trip full of professional presentations and committee meetings, with as much tourism as I could manage tucked in between. By the time I left Oslo for Paris... what's the word for when you're so tired that you can barely function? I honestly don't know where I got the energy, but you can imagine "Oh my god, I'm so tired" at the end of every paragraph in my Paris posts.

A general observation: the airport in Oslo is light years nicer than de Gaulle. After a flight that was delayed and a seat-mate who smelled absolutely terrible, I wandered through de Gaulle noticing that there were smokers everywhere, too much body odor, not enough air conditioning, and a distinct lack of good signage. I stood in the wrong long line to get my train ticket, and then had to do it over again. On the RER, I sat with two young women carrying huge backpacks, and they were as freaked by the horrendous slums we went through as I was. And then a woman burst into song (I swear I'm not lying about this). She sang "Those Were the Days" in French and another song I didn't know, and then went through the train with a cup asking for money. It was sort of like suddenly finding yourself in a movie.

It was overcast and raining when I finally arrived, and it took me way too long to get a cab and find my way to my hotel. And then my room wasn't ready. But my little hotel was only blocks from Notre Dame and as soon as I got settled in, that's where I went. 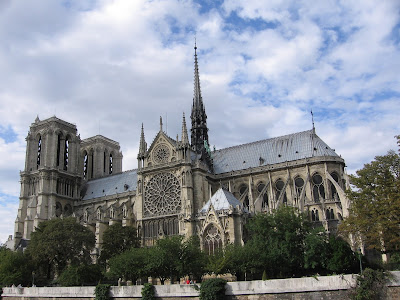 There are a million photos of Notre Dame de Paris. But this is mine, which makes it the best one.

As I walked up to Notre Dame, the sun came out, both literally and figuratively. I followed a crowd of people into the door on the right, went in, and felt shivers go down my spine. I have no words. Well, a few. 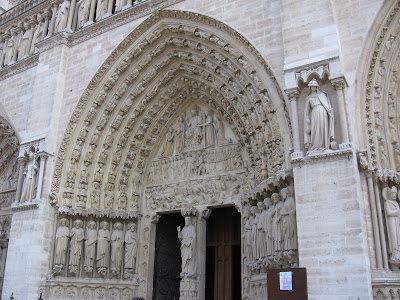 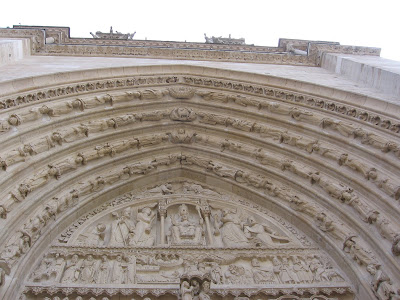 Notre Dame simply overwhelmed me. I'm not sure why. Was it that I'd never been in a building that old before? Maybe it was that I could feel the history of the place, almost as if it were a tangible thing. I sat down in a wooden chair in front of the altar, and just let emotion wash over me. Tears dripped down my face. I even prayed. It is easy to pray there. 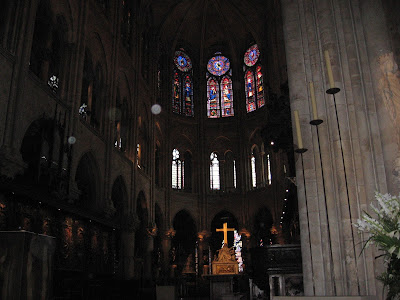 I lit a two Euro candle for my sister Ruthie under the statue of Jeanne d'Arc. Walked around some more and took photos, gave money to a nun. It was very crowded but people were respectful. 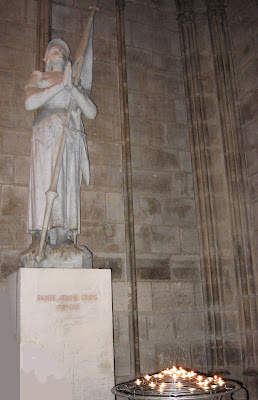 Notre Dame wasn't at the top of my list, but it turned out to be the highlight of my trip. I'll never forget how just being in that building made me feel.

Shakespeare and Company is an old, famous ex-pat bookstore across from Notre Dame, and I very much wanted to see it, not just because so many famous writers had visited the place, but also for the silliest of reasons -- because it was an important location in several episodes of the TV series Highlander. (Methos was in this store!) It has an impressive section of books in English, new and used. I bought Lord of the Flies, which I'd been meaning to reread, and Dude, Where's My Country. 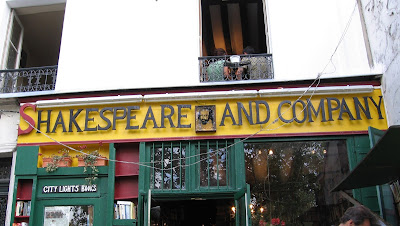 Shakespeare and Company is one of my favorite places on earth. I have spent far too many hours and far too many euros there -- but always emerged with a smile.

I also love Notre Dame. It is a holy, magical place.