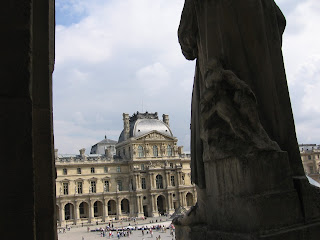 It was difficult to choose among the museums in Paris that I wanted to see, but I finally settled on the Musee d'Orsay and the Louvre. I picked those two because I have a thing for (1) impressionism, and (2) Leonardo Da Vinci. When I was a teen, I was deeply into Da Vinci for awhile and read several biographies about him.

That Saturday, I woke up humming "Mona Lisa." (On Friday, I was humming "At Last".) After petit dejeuner offered free by the hotel (coffee with hot milk, bread, yogurt, croissant) I took a taxi to the Musee d'Orsay and waited ten minutes in line for it to open. There were artists on the sidewalk offering their work, just like in the movies. I bought a still life watercolor on paper from a nice young man, carefully rolled it up and put it in my bag. 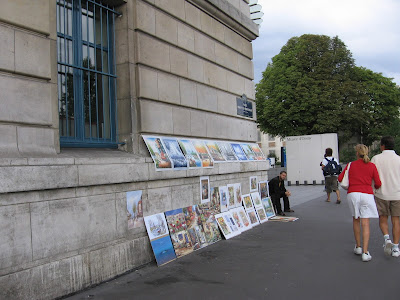 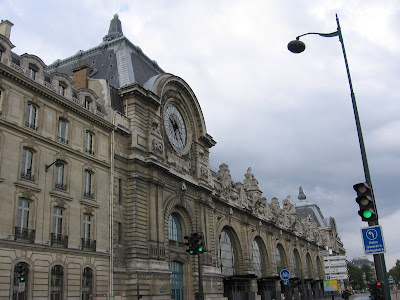 The Musee d'Orsay was once a train station, built for the 1900 Universal Exhibition. The building itself is a work of art, and the huge interior is simply gorgeous. But that pales beside what the building contains.

Oh my god. A whole room full of Van Gogh. A room and a half of Monet. Renoir. Sisley. Way too much Degas. (I'm not as fond of Degas.) I was so early that I was actually alone for ten minutes with Toulouse-Lautrec. There were cameras and wires in every room, not many guards. I saw three paintings that I have owned as posters, including the one currently in my bathroom at home.

Monet's bridge at Giverny. Water lilies. Several versions of the Cathedral de Rouen. Whistler's Mother. I started getting emotional again somewhere in there. No flash photos allowed, and I didn't know how to do them without a flash, so I bought a book. Professional photos of paintings are always better, anyway.

After a few hours at the d'Orsay, I walked down the street and across a bridge to the Louvre, which was the former royal palace until Louis XIV decided he preferred Versailles. (I had really wanted to go to Versailles -- it was near the top of my list -- but with a two-day trip, there just wasn't time.) 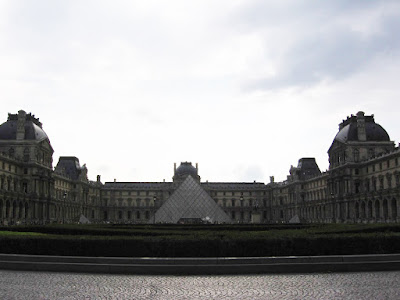 I hadn't realized how immense the Louvre is. Just the approach is overwhelming, with the Tuileries to the left, the Louvre to the right, and the famous, or infamous, glass pyramid over the entrance designed by I.M. Pei. I'll admit that the pyramid seemed to clash, style-wise, but it was still utterly gorgeous. And immense. Three stories high. 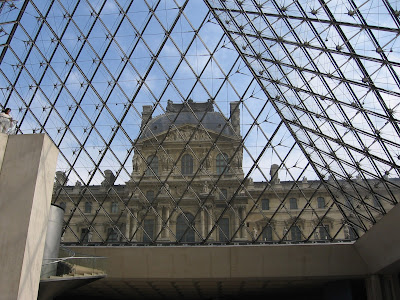 I didn't have to wait in line for long. Did you know that if you work for an art museum, other art museums will give you a discount? The Musee d'Orsay gave me a discount, but the Louvre did not. The clerk was interested in where I worked, though, and asked several questions. In English, fortunately.

The Winged Victory stands alone at the top of a stairwell. Here she is from afar. 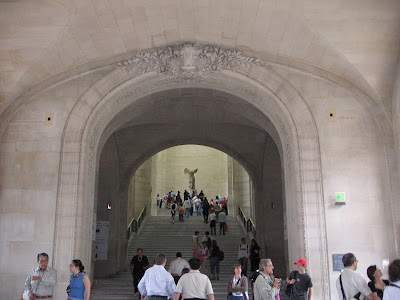 The Italian Renaissance rooms may be the most popular in the Louvre, and the crowds were heavy. There weren't many people near the other Da Vincis, so I stood there for as long as I wanted and really looked at them. Since this happened ten years ago, my memory is a bit dim -- but if you're interested, here are the wiki pages for the individual Da Vincis displayed in the Louvre:


Bacchus
St. John the Baptist
Virgin of the Rocks
The Virgin and Child with St. Anne


And of course, the big one.

Mona Lisa is probably the most famous painting in the world, and she had an entire room of her very own. And it was a crush. I got in line and it moved very slowly as every tourist in Paris had a friend take a photo of them with the Mona Lisa. Flash photos were forbidden, but everyone was doing it; I think the management had probably given up on trying to enforce that edict with the Mona Lisa a long time ago. 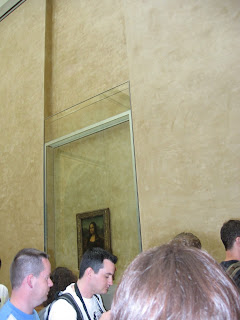 I finally got to her, and she didn't seem real, somehow. She is just too famous. After I got home and was showing my photos to my son Dan and got to this one (below), he said softly, "Wow. That's her." 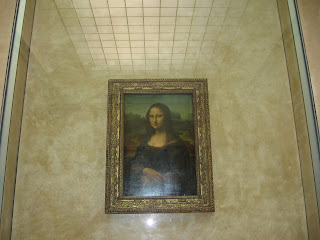 I just have to add that one of my closest lifelong friends was born in Europe and spent a significant amount of time in Paris when she was growing up, and she is certain that the Louvre doesn't have the original Mona Lisa. I kept thinking about that while I was in that room.

After the Italian Renaissance, I wandered around and looked at lots of other stuff. There is a lot of other stuff. It would take days to see everything at the Louvre. I sat for awhile in a large red hall full of portraits of Napoleon. Huge portraits of Napoleon. Had lunch in a cafe that was in a stairwell, and took a photo of the view out the window. If you've never been to the Louvre, it might give you some idea of how freaking immense the place is. Note the pyramid is at the lower left. 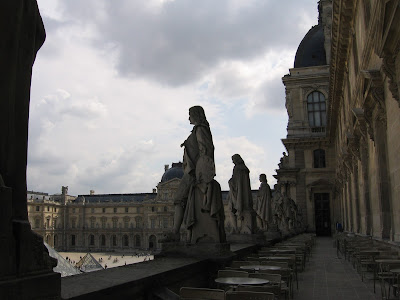 There was a photo in my Paris guidebook of an exhausted man sprawled flat on the floor at the Louvre. I'd been walking constantly since early that morning (actually, for ten days at this point) and knew just how he felt, but I couldn't leave without seeing Venus de Milo. I went through several long halls full of incredible Greek and Roman statues, and finally, there she was. 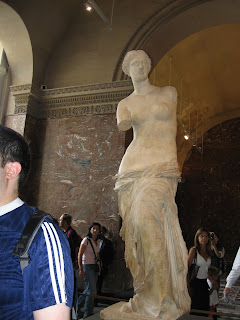 I just couldn't do any more, so I left, found a taxi stand and went back to my hotel. I wanted desperately to do more that final night, but the energy just wasn't there. But I felt a great deal of satisfaction. I grew up so poor, and it never seemed possible that I'd ever get to Paris. My sister never made it. But I did. It would be nice to go again one day, but I'm not counting on it.

A couple more things. For a week after I got home, I dreamed that I was sleeping in a railway station, and my bed was part of the train. Probably residual trauma from the RER. And the day after I got home to Los Angeles, I went to see a taping of a television show, and wrote this article for my column in a web magazine. It has nothing to do with Paris, but it did happen directly afterward.

I can't tell you how much I have enjoyed your Paris posts, Billie. It ranks among my favorite cities in the world and reading about your experiences has brought back so many of my own very happy memories. I, too, am insane about the Impressionists. But, my renaissance guy is Michelangelo,

I once spent an entire rainy weekend in the Louvre. I only scratched the surface. I will go back some day and pick up where I left off...

Thanks again for posting these pieces. What a treat.