They're stark naked, so get used to it 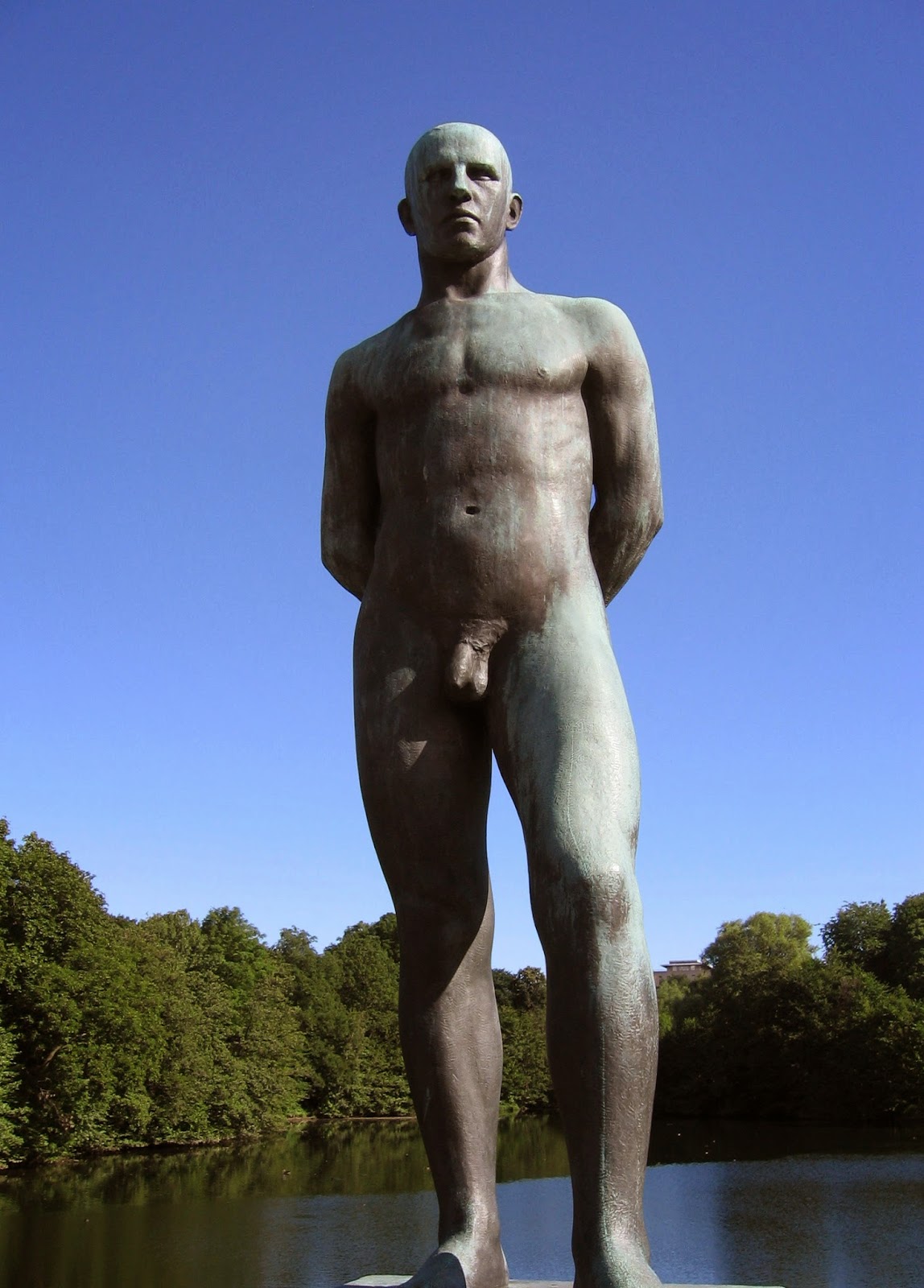 The highlight of my trip to Oslo was the "cultural city tour." We took a bus through the city. I sat with a man named Henry who at first thought I was British (I was born in New Jersey – I do not sound British), and who then asked me questions about my workplace, most of which I couldn't answer.

The tour guide, an older Norwegian woman, was probably my favorite tour guide ever; I wish I'd gotten her name. She told us lots of tidbits about Oslo as we drove – 400 years under Denmark, 100 under the Swedes. She pointed out the Palace, and a building that was once Gestapo Headquarters. Many of the houses have triangle roofs and balconies with flowers boxes that felt a bit Dutch. She pointed out the house where Ibsen died in 1906, and a statue of Sonja Henie.

As we pulled up to Vigeland Park, she said, "They're stark naked, so get used to it and come with me." They were indeed stark naked. The statues, that is. Lots and lots of incredible nude statues.

If you ever have the opportunity to visit Oslo, Vigeland Park and museum are a must-see. It is, as it says on its web page, "… the world's largest sculpture park made by a single artist, and is one of Norway's most popular tourist attractions." I had never heard of Gustav Vigeland, but his work is amazing and I found some of the statues disturbing – especially the monolith of writhing bodies at the pinnacle of the park, and the twisted bodies holding up the fountains. I didn't take photos of the statues of old women or the grandfather and child, but I should have. I also kept trying to imagine a park like this in the way too prudish United States, and couldn't. 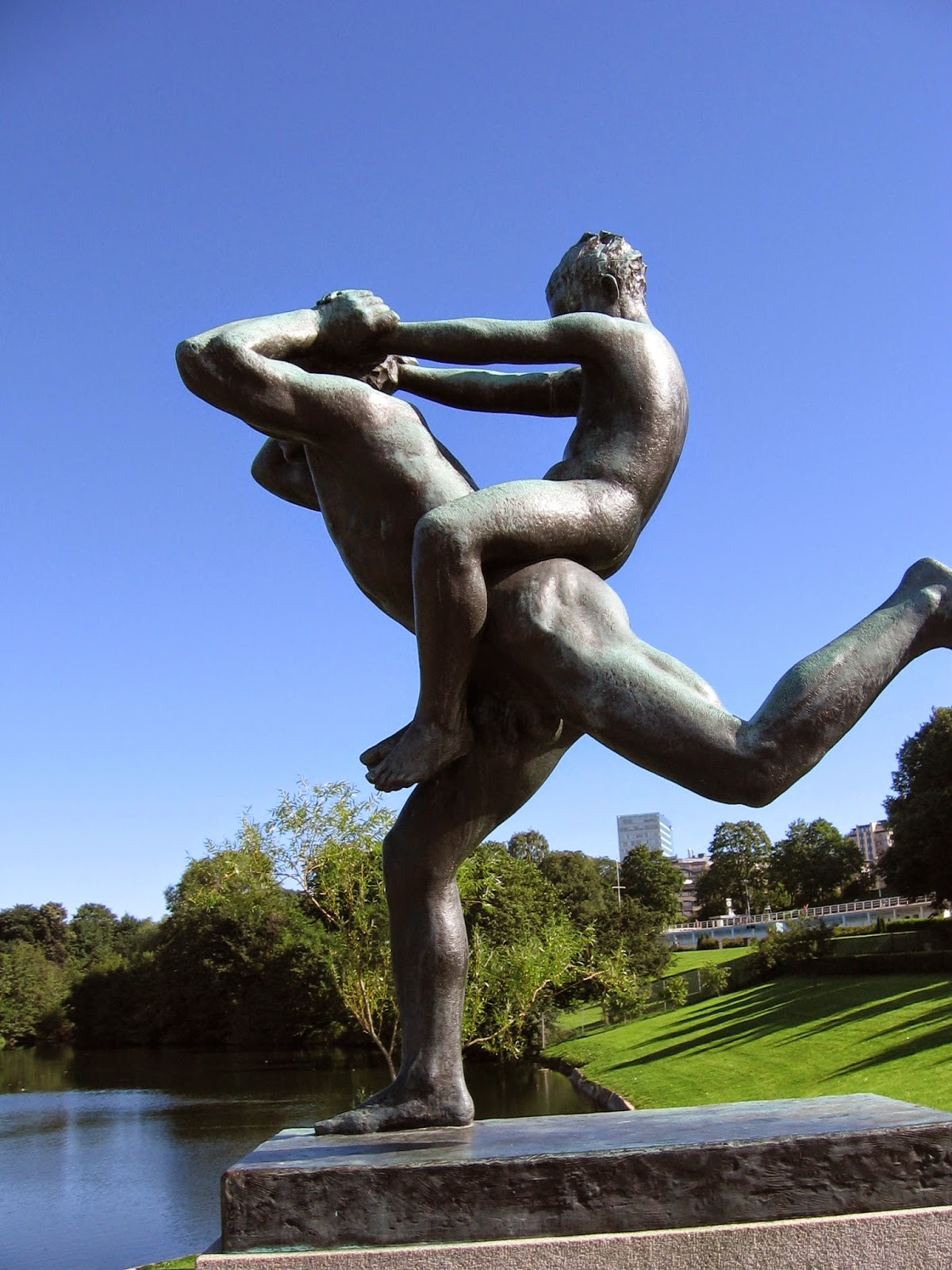 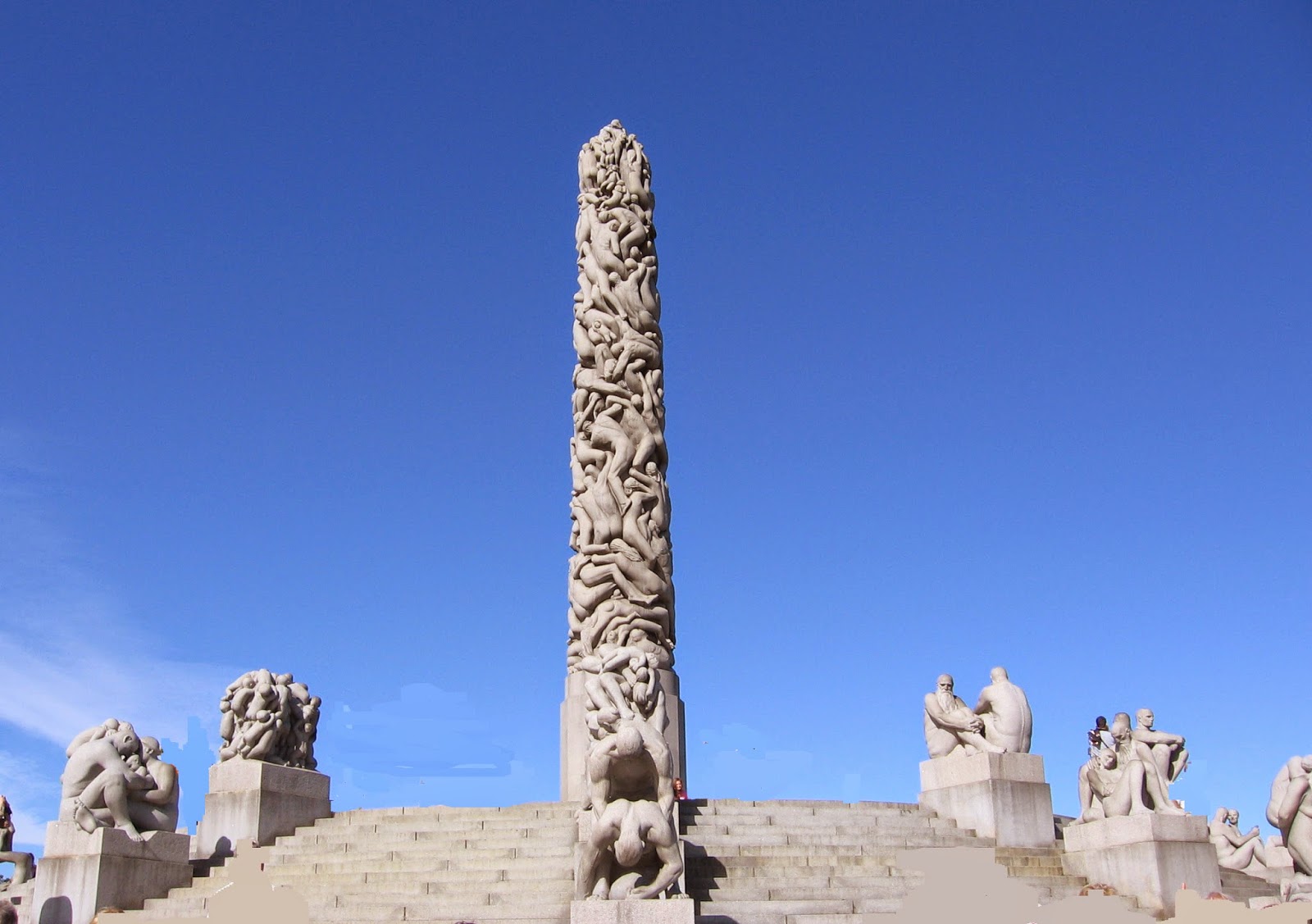 The pillar above is one of the sculptures I found disturbing. Click on it if you want a closer look. I rather clumsily photoshopped out a bunch of librarians, so if it looks a little strange in places, that's why. (I'm okay with including people if you can't really see their faces, but here you could.) The nudes under the trees and fountains were amazing, definitely my favorites.

Our next stop was Holmenkollen Ski Jump, which gave us an outstanding view of Oslo. The jump was huge. I could not imagine sliding down that thing on a couple of slippery pieces of wood. Our guide said the former king had done it twice. He died in the 1990s; there was a statue of him on skis right there. 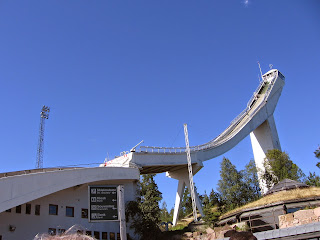 As we drove back to the Spektrum, our guide told us more about the Royal Family. They apparently hang out around certain parts of town, and they have a farm. I was surprised and pleased that the Crown Princess was a single mother before she married the Crown Prince. I could hear in the guide's voice a love for the Royal Family, and pride in her country. And a strong dislike of Swedes, several of whom were on our bus. Awkward.

That night was the cultural evening at the Folk Museum. (It wasn't easy getting there. Imagine over a thousand hungry librarians in front of the Radisson waiting for many, many buses.) When we arrived, they handed us backpacks with a box lunch inside them and a "plate" to sit on. We rambled about athletically – many of the paths around the Folk Museum were steep and stony, and I'll admit I was a bit afraid of falling on my face.

The Folk Museum features a number of very old buildings that were reconstructed on the grounds. We went through buildings and saw people in native costumes and horse-drawn carriages. I saw one of the most famous librarians in the world petting a horse. (Did you know there were famous librarians?) Most of the music was Norwegian, but as we were nearing the end, we encountered a South American musical group, and librarians dancing to the music. One librarian from Spain said to me, "That is not native Norwegian music!" and laughed.

Of all the buildings at the Folk Museum, the twelfth century Stave Church was the standout. I'd never seen a church that looked like it. The shape of the exterior seemed almost Asian. The interior was surprisingly small, and I tried to imagine what it must have been like to attend that church centuries ago and during a harsh winter. 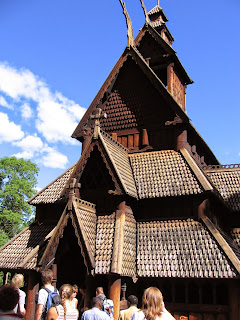 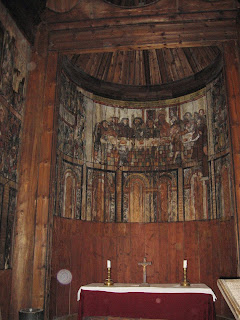 This is part two. Part three will be posted next week,

The jump was huge. I could not imagine sliding down that thing on a couple of slippery pieces of wood. Our guide said the former king had done it twice. He died in the 1990s...

I loved the Vigeland park too - I have to say I'd never heard of him before (or since) either, but I liked his style.

The folk museum, though - eh. I think it was above my head:). It was a really cold day when we there there which didn't help.