Bits of Oslo, the Spektrum and the King

I attended an international library conference in Oslo, Norway in August of 2005.

As I mentioned before, I grew up poor and have been working poor most of my adult life. I'd never had the money or opportunity to visit a foreign country, and often thought I never would. Norway was the first foreign country I ever visited, and I couldn't have asked for a better experience. I kept a journal, which is where these posts came from. (I have a good memory, but not this good.)

The Oslo airport was so clean and beautiful, and so was the train into town. The seats on the train were made of wood, and the trip so smooth it was like floating. My cousin Tracie, who decided to go with me, was already there when I arrived. (We weren't living in the same part of the U.S. in 2005, so we traveled separately.)  Tracie and I spent eight days at the Radisson in Oslo and took several tours that were organized by the conference at additional cost. Of course, lucky Tracie got to do a lot more touring than I did, since she didn't have to attend many, many meetings.

I loved the room. The bed, a single right next to Tracie's, may have been the most comfortable hotel bed in which I've ever slept. I had a complete lack of success in finding CNN on our room television (I knew it existed because I saw George Clooney on CNN in the lobby). Instead, we watched lottery numbers being announced in Norwegian. It took me five minutes to find the mute button on the remote. It took me even longer to figure out how to work the futuristic faucets and knobs in the bathtub. 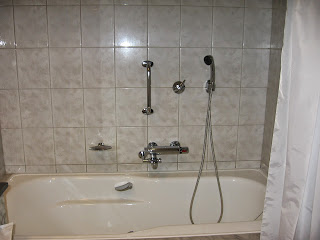 The hotel buffet breakfast was advertised as the best in Norway, and it may very well have been. Along with quality versions of just about every American breakfast food, they also had cheeses and cold cuts, smoked fish and grilled tomatoes as well as raw vegetables.

The first morning, we went to a pocket park behind the hotel where they were having a small flea market. Norwegian junk looks a lot like American junk, except with less plastic. And then we walked by the water for awhile. There were ducks and homeless people. And a chocolate store, where I bought pistachios. 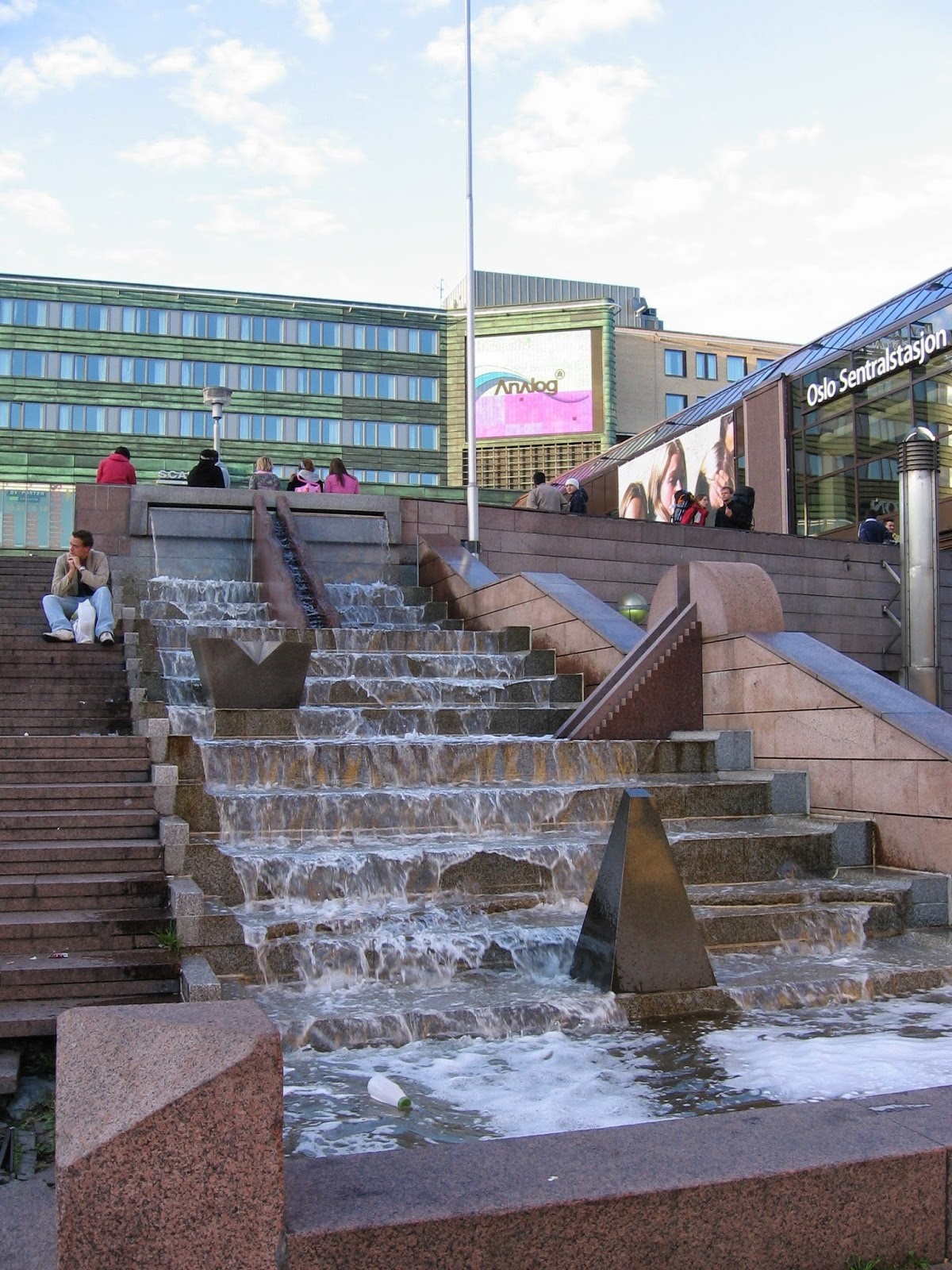 After the meetings, Tracie and I went out walking toward Karl Johans Gate, a main street in Oslo, looking for restaurants. We ate filled baked potatoes at a place called Egon's. It was hard to get around the trolleys; there were railings all over the place to keep pedestrians off the tracks. At major intersections, there were underground tunnels for pedestrians that included convenience stores. Later, we walked down town to see the water. All the stores were closed and there were lots of skanky teenagers in ripped clothes and dyed hair, and they all smoked. I chickened out before we got to the water and we turned back.

When we returned to our room, it was 10 pm and still a bit light out. (It's August.)

The opening ceremonies for the conference reminded me of the Olympics, complete with native performers and national flags. There were even people holding candles. I particularly liked the closing music by an Irish group called Secret Garden who did a song for the new century. The ideals and politics of this sort of thing always make me proud to be a librarian.

The Spektrum was impressive. There were plaques that said Paul McCartney and Elton John had performed there. (Not together, I'm sure.) The stadium seating was so steep and cramped that my fear of heights kicked in. We heard afterward that someone fell and broke his leg during the ceremonies.

The King was there; he sat somewhere to the side. We stood when he entered and stood when he left. I wish we'd been able to see him a bit better, because I'd never been in the same room with a king before. (That's King Harald V, by the way.)

Afterward, we attended a dinner. It was in a very old Norwegian restaurant that had reindeer and whale on the menu. Tracie has been a vegetarian since she was a teenager and there wasn't a single vegetarian entree on the menu, so the chef made her a special dish. We had "gazpacho" as an appetizer. It turned out to be tomato sauce.

In fact, we noticed a lot of things that were Not Like Home:


strong coffee, but no decaf
no washcloths
no top sheets on our beds
everyone speaks English
street musicians, artists and people statues
fish and lunch meat for breakfast
cups and saucers, but no mugs
no bagels or citris fruit
no salad dressings
nice public toilets, but dirty streets

Tracie bought Pringles in the gift shop. They were "spring onion and feta flavour".

This is part one of a three part diary about my trip to Oslo, Norway. Stay tuned for part two, which contains nudity and is a lot more exciting,

And a chocolate store, where I bought pistachios.

I think you and I need to have a serious talk about appropriate chocolate-store behavior.

I love the idea of a whole land without decaf coffee.

I always love your comments, Josie, but I particularly love this one. :)

6 years ago, hubby found his birth mother and found out he was 1/8th Norwegian. Since then, we have been to Epcot's Norway and hubby has been to Norway three times, the last with our 12 yo daughter. He has not stayed in any European country but Norway so far. I love your post.

Thanks so much, Docnaz. I loved Norway so, so much and am so glad I got to visit.

Nudity??? This is the one time I would like a spoiler alert! Do tell!

Yes, the top sheet thing! They change the duvet cover every week instead. That's why I'm a champ at changing duvet covers: I was taught how by a Scandinavian girl in a youth hostel.