Seoul is very modern, and very western. While I was disappointed with my more traditional tourism experiences, mostly because it was just too damned hot, I loved absolutely everything else about my trip to Seoul. Along with a terrific and meaningful conference experience, I loved the people, the food, the hotel, and the city of Seoul itself.

And for some reason, I really loved the Coex Mall, a huge one attached to the conference center. I don't usually enjoy shopping, but I found that mall fascinating. Maybe it was because it was a glimpse of everyday life in a place that was unfamiliar to me. I kept going there to walk around and look at the shops and the people. I bought several meals there, as well as earrings and hair clips and a few other souvenirs. 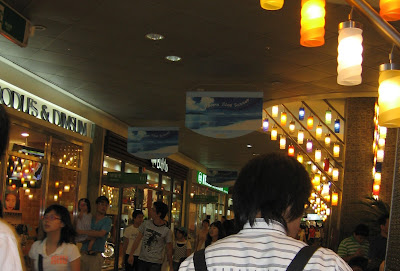 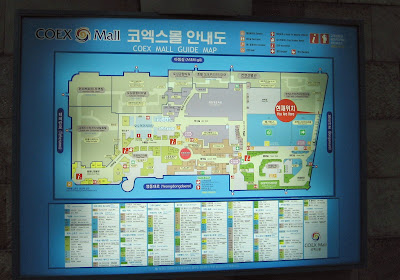 While the women I encountered were uniformly polite, and the ladies at the manicure place were delightful, many of the Korean men in the mall were outright rude. They pushed in front of me or deliberately walked in my path, expecting me to get out of the way. I'm sure it's a cultural thing, but it was a shock.

In the spirit of fairness, I must add that every employee of the hotel, including the men, were without exception courteous and very friendly. Two of the male hotel employees asked if they could practice their English with me (my entire Korean vocabulary consisted of "anyohaseo," which means "hello") and they asked questions about Los Angeles and talked about how much they would love to visit there.

I also got to meet the mayor of Seoul at an event (was it a reception at the library in the U.S. Embassy? It was twelve years ago and I don't recall). I didn't note down his name at the time, but according to the internet, it had to be Oh Se-hoon. I do remember thinking that, for the mayor of a huge city, he was remarkably young and cute.

On the way to that particular event, we passed an immense, half-built dragon display in the street. I'm not sure what it was for, but I took a photo. 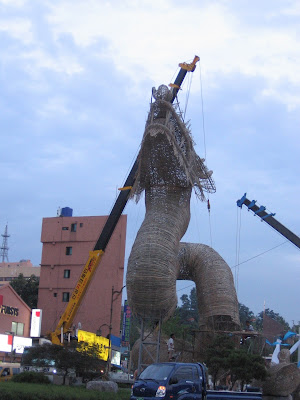 Finally, I have to rave about the food. Especially at the Coex hotel, because it was amazing.

The breakfast buffet at the Coex included wonderfully seasoned fried rice, salmon and steak. (I kept thinking of breakfast buffets in the United States that feature cereal, eggs and pastry.) I loved Korean yogurt, the "pon cakes," and the big purple grapes. The menu featured Australian beef and New Zealand butter, and watermelon seemed to be very popular. And of course, kimchi was everywhere. Unfortunately, I kept trying kimchi but I couldn't stand it. Maybe it's an acquired taste.

I was one of four people from my workplace attending the conference. On Sunday night, we got together for dinner. Surprisingly, this turned out to be a unique culinary adventure. One of the committees had arranged a private dinner at a small restaurant in the mall after it had closed for the evening, and they invited us along. For 20,000 won, or about twenty dollars US, we had an incredible Korean banquet.

They brought us dish after dish on small plates that we passed around. I tried everything, although I really couldn't eat about half of it, both because it was way too much food and because some of it had tentacles. But much of it was just delicious, with tastes I'd never experienced before. The four of us laughed and drank Korean beer and talked with the noisy members of the committee and each other, and it was the best "duty dinner" I ever had.

In fact, my eight days in Seoul were unforgettable. Every time Seoul is mentioned in conversation or on television, I experience a mini-flood of pleasant memories. I've been thinking of Seoul a lot lately, and not just because of the 2018 Winter Olympics.

Seoul is near the northern border of South Korea, and we currently have an incompetent buffoon in the White House who seems to be deliberately antagonizing North Korea. If Trump manages to start a war, South Korea is likely to suffer the most because of it. Please, people. Let us impeach this monster before something terrible happens.