The End of the Republican Party 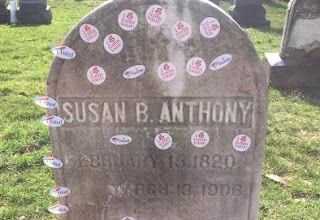 A couple of days ago on the way somewhere, we pulled up to a stoplight behind a pickup truck that had a prominent bumper sticker that said, "PRESIDENT TRUMP. DEAL WITH IT." And I lost it. I yelled "F--k you!" several times along with a couple of other choice epithets. Daniel, who was driving, was fortunately a lot more restrained.

Afterward, I was ashamed. (As well as thankful that the guy driving the truck didn't get out with a gun and shoot us.) It is not like me to yell obscenities, and it did absolutely no good. I had descended to their level, the level of this surge of white nationalist anger and hate. These people who voted for Trump have chosen an authoritarian and possibly fascist government, but I can't believe most of them really knew the ramifications of their choice, or that they'll be happy with what happens next.

What do these wide-eyed, hate-spewing Trump fans think he's going to do for them? Bring back manufacturing jobs that will never return? Rid the country of everyone who isn't white? Good luck with that, guys. Honestly, I think a lot of Trump's popularity comes from the fact that he had a popular television show, so people think they know the real him. Or do they love him because he's rich and lives on Park Avenue and has a beautiful trophy wife, and they'd love to believe they could someday have the same? Maybe it was just a chance for them to give the finger to liberals and progressives.

So obviously, this election has been hard for me. I actually cried, and more than once. I was excited about the possibility of a woman for president, and I mean a woman who is qualified for the job, not a flapping ignorant lunatic like Sarah Palin. But no. After eight successful years with our first black president, what did we get? A smack in the face and a backward march to the 1950s. Greater racial divisions. A good chance that women will be stripped of their reproductive choices. A better chance of yet another war piled onto the ones we're already waging, because that's what Republican presidents do: they start wars. Wars are good for business, after all. And it's mostly poor people and people of color who have to fight those wars, people that most Republicans don't seem to care about.

The Republicans in Congress are wildly excited right now. They have the light of unbridled power sparkling in their eyes. They're going to do all those things they've always wanted to do, starting with killing Obamacare, taking down Social Security and Medicare, reversing Roe v. Wade, scaling back environmental protections (China made up climate change, you know) and Wall Street regulations. It makes me feel sick inside, thinking of how their policies will hurt the people of the world.

But at the same time, I feel that this will be the end of the Republican Party, that there's no coming back from this sort of darkness. The political pendulum exists in this country, and the harder it swings in one direction, the further it swings in return. Look at the Vietnam War bringing on the protests of the 1960s, at George W. Bush followed by Barack Obama, and I'm sure there are plenty of other examples in our history. The Republican Party has moved from reasonable fiscal conservatism, to the Bush/Cheney neocons, to the Tea Party, and now they're dipping their toes into fascism. Putin and ISIS were thrilled by the election of Donald Trump, because they see within it the seeds of our destruction.

It is difficult for me to believe that we cannot bring our country back from this brink. The antiquated Electoral College gave Trump the presidency, not the American people. More young people in this country are progressive and tolerant, while the majority of the Republican Party is old and white. They're the past. Progressives are the future.

Good post. I'm glad that guy didn't shoot you. :) I'm also trying to be positive, but it isn't easy.

I feel this election was a choice between pest (Wall Street Hillary, who has repeatedly supported aggressive wars, which have killed thousands of innocent people – including children) and cholera (well, Trump). That's not a problem only in the US but all over the world (UK, Germany, etc.). That just happens when the only "value" left and bowed to by all major parties is making profit at all human costs.


It's, as novelist Teju Cole rightly says, "A Time for Refusal".

"Evil settles into everyday life when people are unable or unwilling to recognize it. It makes its home among us when we are keen to minimize it or describe it as something else."

Epic piece. As long as there are people out there, writing such stuff, I do still have hope for humanity.