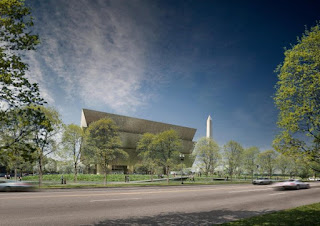 This morning, I was listening to several speeches given during the opening ceremonies of the National Museum of African American History and Culture. To my surprise, these were the lines that got to me:


"A great nation does not hide its history. It faces its flaws, and corrects them. This museum tells the truth: that a country founded on the promise of liberty held millions in chains, that the price of our union was America's original sin."

That was near the beginning of the speech by former president George W. Bush, who signed the bill authorizing the construction of this museum on the National Mall.

George W. Bush is my least favorite U.S. president. He is no champion of African Americans; what he did, or more accurately, what he didn't do during the aftermath of Hurricane Katrina in 2005 was outright criminal. But as President Bush was speaking with sincerity about the greatness of Dr. Martin Luther King Jr., Harriet Tubman, Chuck Berry and Willie Mays, I tried to imagine a President Trump saying those things. I couldn't.

As this insane election season has progressed, I kept hoping that eventually most Trump supporters would acknowledge and reject the racism, both underlying and overt, in so much of what he says and does: the constant dog whistles, the retweeting of white Nationalist memes, the transparent photo op in Flint, the fact that the KKK is so thrilled that a guy like them is getting close to the presidency.

(I'm not going to do an in-depth article with proof of Trump's racism, since way too many have already done the work for me. Here are a few: the New York Times, the Huffington Post, and Fortune. A casual internet search will net you many more.)

But recently, I finally internalized that it was hopeless. Trump supporters will never reject his racism.

I believe that many of Trump's supporters aren't actually racist. They may realize that Trump is a racist, and they have chosen to ignore it or rationalize it and support him anyway. I can only conclude that they believe that what Trump promises to do for the country as president outweighs the fundamental evil of racism.

Maybe for them it's all about Trump's supposed superior business acumen (go read about his business failures and many bankruptcies, guys). Maybe they believe in more deregulation of Wall Street, because they believe the crash of 2008 didn't almost bring down the world's economy. Maybe they believe that climate change is a hoax, because 97% of the world's climate scientists have some strange reason for lying about its existence. Or perhaps they are worried about the composition of the Supreme Court because they believe in the need to oppress LGBT Americans and legislate what women do with their own bodies. Or it's their desire to repeal the Affordable Care Act because the poor don't deserve access to health care. Or maybe they want to eliminate Social Security because they think more elderly people should starve to death. (Maybe you can tell that I have a problem with far right social issues. I will freely acknowledge that I do.)

But worse than the Trump supporters who overlook it are the supporters who apparently see racism as a feature, not a bug. They seem to think racism is a welcome return to old-fashioned American values. They could never acknowledge, like George W. Bush did this morning, that slavery is America's original sin, that racism is evil at its core, and that African Americans are citizens of this country that deserve the same rights as white Americans. It's like they're saying black is white. Or okay, taking the implied racial symbolism out of it, that the sky is orange.

I can't help reacting emotionally when I am forced to acknowledge that such a large percentage of Americans are still fundamentally racist, because I was naive enough to believe that we were slowly getting better than this. I cried the night that Barack Obama became our first African American president because I thought we'd made genuine progress toward a color-blind society. But if the worst happens and Donald Trump becomes president, we may swing further toward fascism than our country and even the world can endure.

I wrote this while watching A.M. Joy this morning so I tweeted it to Joy Reid. And she retweeted me! :) Woo hoo!

Wonderfully said. As an aside, Bush has a greatly skilled, very respected speech writer, by the way.

Excellent blog. Ran across it through Twitter. A delightful discovery!

I suspect it is more that people in the country vote their "team" rather than their conscience.