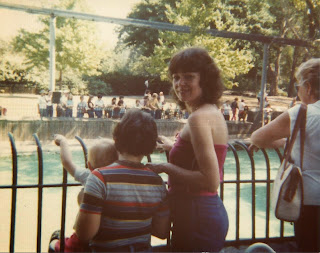 After we lose someone we're very close to, the world is never quite the same. When my sister Ruthie died suddenly in March 1994, it felt like a part of my world just ended, like there was this immense, Ruthie-sized hole in it. We all know intellectually that we will die someday, but that day was when my own death became real to me. If Ruthie could die, then I knew in my heart that I would, too.

Ruthie was six when I was born. As children, we shared a small bedroom until I was ten and she was 16, which had to be hard for her. We had bunkbeds, and she had the lower one that she curtained with a blanket so that she could have the tiniest bit of privacy.

Because Mom worked nights and the less said about Dad the better, Ruthie got stuck babysitting me much of the time we weren't in school. Our childhood circumstances were awful and a lot of bad things happened; Ruthie, the eldest, endured the worst of it and protected me as much as she could. I spent a lot of my childhood tagging along behind Ruthie as she walked around the small seaside resort town in New Jersey where we lived, as she went to the beach or the boardwalk or hung out with her friends. She loved the beach, and she loved to walk. (I didn't love either the beach or walking, but I'd go anywhere that she went.)

Ruthie was smart, pretty and well-liked in school and she had several close girlfriends as well as a few remarkably hot boyfriends. She went to five proms in her sophomore through senior years in high school. Five! I didn't go to a single one. I was a bratty, smart, anti-social loner nerd type, but I looked up to Ruthie and wished I could be like her instead of what I was. The first time I saw the movie Picnic and they called the two sisters "the pretty one" and "the smart one", I remember thinking, Ruthie was the pretty one, except that she was smart, too.

When I was eleven and our parents went through an epic, horrendous divorce that involved violence, police and psychiatrists, Ruthie left home, got a degree in commercial art, and got married. She surrounded herself with art and even belonged to an art colony for awhile, but was never able to make enough to live on using her degree. She waited tables and tended bar her entire adult life to make ends meet, and raised a wonderful son alone after her husband took off. When I was a teenager and she was in her twenties, we spent a lot of time together as friends and confidantes. I can still remember how important that was to me, even though she had retained the habit of telling me what to do from our childhood. We grew apart to some extent as we got older, especially after I moved to another state.

Ruthie adored animals and had cats, like me. She was a flaming liberal, also like me, and her friends were diverse and fun. She told jokes particularly well, which came in handy when she was tending bar; I can still see the expression she would get on her face before delivering a perfect punch line. Her favorite musical artists were Stevie Wonder and Elton John. She loved art, of course (I remember an extended fascination she had with Dali) but she was also a constant reader, like me. She was always in the middle of a book, and she read a lot more nonfiction than I did. The night she died, I picked up the book she had been reading and finished it for her. It was Maya Angelou's Wouldn't Take Nothing for My Journey Now. Really, it was; I'm not making that up. I still have that book, with her bookmark inside it.

This little essay was particularly hard to write. Even after twenty years, I can't talk about her or write about her without crying. This is a big anniversary, though, and I just wanted to mark it in some way, to acknowledge her loss, to share what she meant to me.

I just found your new blog. My mother passed away last year from cancer (and my dad a few years before that) so this was an enormously touching post to read. I've been debating post something I've written about mom for a while now but as you can imagine, that's extremely hard to do. Hopefully one day I will.

P.S. I love that Dan turned out to be your son. All these years and I always assumed he was your husband! God bless him!

Thank you so much, Nadim -- what a lovely comment. I'm so sorry about your mother. I wasn't sure I should post something about my sister, but even though it was hard to write, it felt good to acknowledge her, you know? Maybe someday you'll be ready to write about your mother.

A beautiful tribute, Billie. I have sisters and can't even imagine the pain of losing one.

This is a beautiful essay, Billie, and a wonderful way to remember your sister.

I am sure your sister is somewhere smiling about this lovely tribute you wrote for her, Billie. I, too, have a sister with whom I am close. I can't imagine your pain, and I understand why it is still so hard for you to write about your loss.

This is a simply lovely essay, Billie, that made me smile as the tears welled up. Your sister sounds like an amazing woman whom I would loved to know.

She sounds like she must have been a fabulous sister and an amazing woman! Sorry you had to lose her so soon, I can't even begin to imagine the pain of that.

This is a beautiful tribute, Billie. You have touched on this subject before, and everytime I find it deeply touching. Thanks for sharing.

Cheers to your sister.