And now for something completely different: Hummingbirds

I like feeding birds. The first day I was in my new apartment in Los Angeles (omg, 2001), I saw a hummingbird outside my living room window and just went nuts -- they're soooo tiny!  I eventually got a cheap feeder and set it up on my balcony. The cats loved it. Although sometimes Spike got so excited that he would try to go through the screen door, so I would have to block it with cardboard or a box fan. It helps that it's always summer in Los Angeles. Okay, so it's not, but it feels that way when you only get two weeks of winter.

Keeping that feeder up was work, and sugar water is sticky and messy, so I finally got tired of it. But I had that feeder up for quite awhile and after many tries, I got a couple of good photos that made me happy. I've always wanted to post them somewhere. And now I can. Click on them if you want to see the larger version.

Sometimes a big group of hummingbirds would arrive at the same time and skirmish for a chance at the four slots in the feeder. They would chase and dive bomb each other, circling the feeder and making adorable twittering sounds. This photo was me trying to catch a moment when there were nine of them at once. I only got five (they move so fast and any motion would frighten them away) but I really like the composition of the photo, with three of them in flight and one actually landing on a perch. 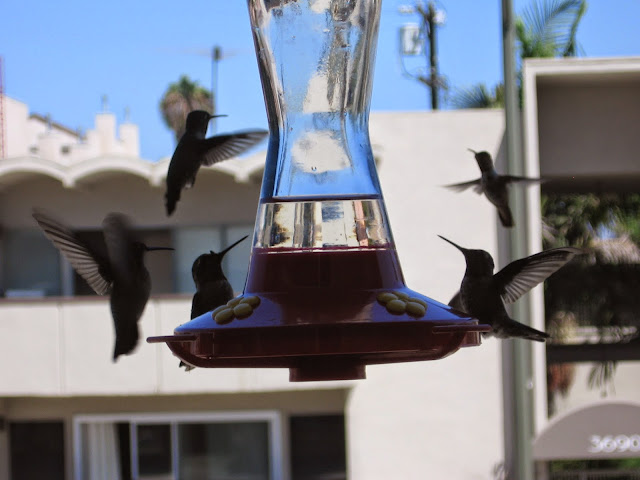 The other really good one shows three of them perched and about to feed. Doesn't it look like they just sat down to dinner and are discussing the fare? "This sugar water has a piquant bouquet." Getting a photo of them on the feeder was so hard. I tried and tried, and this was my best effort. 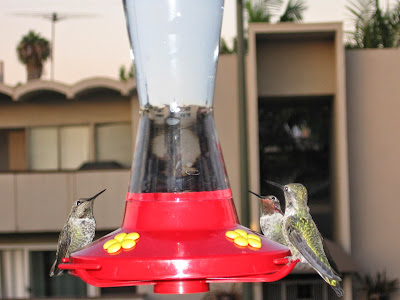 Just for your information, if you want to start feeding hummingbirds, don't use the red instant food that comes with some of the feeders. All you need to do is boil one cup of water, add a quarter cup of white granulated sugar (not raw sugar, by the way, or brown sugar -- it has to be white granulated sugar or they won't drink it), stir, and let cool. I heard the red dyed stuff isn't good for them, which makes sense.

Of course, a mini photo journal wouldn't be complete without one of my cats watching the hummingbirds. Although here, they're mostly on the lookout. I wish I could add a file of the sounds they would make when the birds showed up. 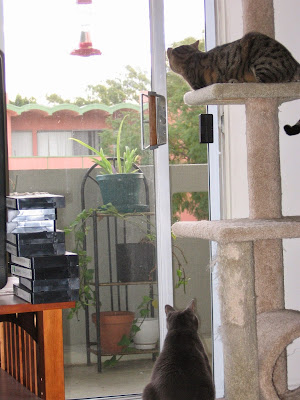 (I just realized why I posted this. There was snow when I woke up this morning. Maybe I really do miss Los Angeles.)

Wait, do other places not have hummingbirds? Or they jut don't have them all year? I used to have a feeder in the backyard but it attracted ants and it was a whole thing. I still see them a lot though. I love when I catch them perching, it seems like they hardly ever sit still! Those cats look…hungry.

There must be hummingbirds in other places, but I don't remember ever seeing one up close before I moved to L.A.

Those cats look... hungry. Those cats are extremely well fed. I think they just yearn for the hunt. :)

My mom has managed to attract hummingbirds to her back yard using the same sugar water mixture and a feeder she found at some garage sale. They are beautiful birds.

Our neighbor's cat watches them with exactly the same body language as Spike and Fox. It always makes me laugh.

On my run just now I saw not one but TWO hummingbirds perched on a telephone wire and it made me think of this post. :) Hummingbirds would be absolutely terrifying if they were bigger, you know?