A hundred days, and Roma 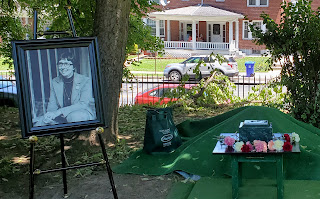 I'm trying to be hopeful.

Tomorrow marks a hundred days until the presidential election, with signs that there might be a blue wave to end all blue waves. With thousands dying of COVID-19 and no federal plan to fight it, protesters in Portland facing down Trump's brownshirts, active voter suppression and Russian interference, the acceleration of climate change, oh my God, I have never been so depressed and anxious about the state of the world before.

My depression has been worsened by the death last month of my aunt Roma, one of the most important people in my life. She was my role model since I was a child. She was a liberal Unitarian Universalist, an active feminist who marched on Washington in the 1970s. She wrote plays, many about women in history, that were performed all over the country; I saw a number of them on stage over the years. Roma adopted disabled cats and volunteered at a local animal shelter. And she hosted amazing house parties that I still remember as some of the best times of my life. My uncle Richard, Roma's husband, was so proud of her accomplishments. Uncle Richard was something of an oddball, but he was also the only male relative I had that took a strong, consistent, and positive interest in my life.

Because my childhood was a mess. My father abused, and my mother drank. I tried to kill myself when I was sixteen. When I left home, I deliberately chose to make Roma, Richard, and their daughter Tracie my family of choice. They were the family I visited on holidays and vacations. Roma and Richard were my son Daniel's de facto grandparents while he was growing up. Roma wrote constantly, sent gifts, and took Daniel on trips, including twice to New York City.

Five years ago, I moved back to Pennsylvania in order to be nearby while Roma was suffering from Alzheimers. My cousin Tracie chose to devote years of her life to caring for Roma during her final illness. (Richard passed away from cancer several years ago). Tracie hung in until the very end caring for Roma, something I don't think I'd have the strength to do. Roma finally passed away last month, after only a few days in hospice. Of course, she wasn't herself the last few years. Alzheimers is unbelievably cruel. It decimated the mind of the smartest, most vibrant woman I've ever known. The last time I saw Roma, she spat at me.

Roma would have hated Trump with a fiery passion, if she'd been herself. She desperately wanted a woman to be president, as I do. I'm holding out hope that whomever Joe Biden chooses as his vice president will eventually be the woman that breaks that final American glass ceiling. The recent polls have begun to make me hope that Trump won't be able to cheat himself into a second term, but it's hard to get past what happened in 2016, isn't it?

At least my vote means more in Pennsylvania than it did in California. And could we fix that too, please, while we're working on voting rights, racial equity and climate change?
by Billie Doux

So sorry for your loss, Billie.

Wish I could do more from out of country to boot the Orange Bastard.

It looks good, but so did 2016. I hope people don't get overconfident, and we get none of those "Bernie or bust", or "Joe is not progressive enough". That's a lesson that should have been learned since Nader's idiotic "Bush and Gore are the same", and twenty years later the US still elects dangerous idiots that make the world a worse place.

Who would have said that I'd miss Dubya. He was a giant compared to this idiot and his huge cult of followers and cowards. And that includes about every republican in the senate.

Dubya made Nixon look a lot more acceptable. Trumo has made Dubya look good. Maybe in a few years America will come up with someone who makes Trump seem like a happy memory... Even if you manage to put him down in November, the future looks pretty bleak, unless you can find a way to exorcise millions of your fellow Americans.